Dogmatism is a disposition to hold fast to beliefs regardless of experience. It is a psychological state that describes the habitual mental state in which a belief is held, not the content of the belief itself. Thus a dogmatically held belief can be positive or negative, claiming either that some state of affairs is true or that it is false. In A Buddhist theory of moral objectivity, negative dogmatic beliefs are described as sceptical (see scepticism): but more recently I have reserved the term scepticism for agnostic rather than denying types of position. Dogmatism, like all psychological states, is also a matter of degree: one can be more or less dogmatic.

There is a close relationship between dogmatism (which describes the psychological state in which beliefs are held) and metaphysics (which describes certain types of belief or claim). My thesis is that this relationship is such that holding a metaphysical claim requires a degree of dogmatism because of the remoteness of metaphysics from the test of experience, and that the more a metaphysical claim is asserted and defended in defiance of experience, the more dogmatism develops. In the first part of A Buddhist theory of moral objectivity, cumulative evidence is presented for this relationship in the form of a historical survey of past Western philosophies, showing the ongoing relationship between metaphysical beliefs and dogmatic psychological states as recorded in the histories of past thinkers. However, there is no reason why this thesis could not be explored in other empirical ways, for example through psychological experiment.

Using the Jungian psychological model of ego and psyche, dogmatism can also be understood as the assertion of one set of egoistic desires (with associated beliefs) over desires and beliefs found in the rest of the psyche and excluded from current identification. By excluding alternative possible beliefs, the ego maintains a barrier between itself and the rest of the psyche, and avoids having to address the conditions recognised by alternative possible beliefs. For example, defending a belief in God requires the continual rejection of atheism, as well as one's own atheistic desires that reject God, and also avoidance of recognising the kinds of conditions stressed by atheist arguments. Similarly, defending atheism involves a rejection of one's theistic desires and of the conditions addressed by theists. This might mean, for example, that on the one hand atheists do not address the psychological needs that theists can address through prayer, and that on the other theists do not understand how the world around them could be seen as meaningful without a belief in God, thus missing an entire sustaining area of human experience.

Dogmatism is marked by the assumption that there is an enemy to be rejected, that certain beliefs are definitely right and others wrong, prior to any possible investigation. Instead of seeing both their own beliefs and those of others as provisionallyjustified beliefs, requiring ever further investigation and argument, dogmatists' view of the world requires that investigation and argument can only be used to persuade or confirm, never to get closer to an undiscovered truth. Fortunately we are all only partly dogmatic, and even the most rigid people still sometimes appear capable of recognising the conditions that press upon them, and interpreting their metaphysical beliefs with greater provisionality. Even the greatest dogmatists do not lose all ability to respond to evidence, even though their response is often greatly impaired. For example, the handshake between Ian Paisley and Gerry Adams in March 2007 in Northern Ireland, after decades of dogmatic antagonism, provides a symbol of hope for many, that the barriers of illusion lying between apparently unreconcilably opposed figures can be gradually weakened and dismantled. 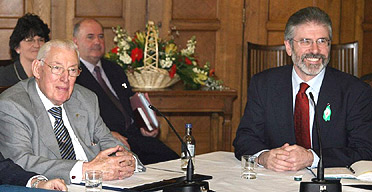 The psychological basis of belief (from thesis)

Dogmatism and scepticism (from thesis)