The process of integration can be graphically represented by the two mules: 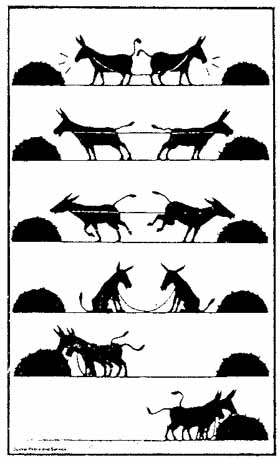 The two mules begin with opposed energies, which support incompatible desires. At the beginning their whole conception is that these desires must be incompatible by their very nature. After developing greater awareness, however, they come to recognise that the incompatibility is not a necessary aspect of the situation, only of their way of understanding it. Their previously opposed energies then become integrated, because they share goals which benefit them both.

Acceptance of this theoretical basis, like that of any other, can only be justified by its relationship to experience and its fruitfulness for further investigation. One important outcome of this model, however, is the way in which it allows a psychological explanation of moral objectivity in terms of integration. The more integrated we are, the more moral we are, because the less we are subject to delusions created by psychological conflict, and the more effectively we are able to address the conditions around us as a consequence.

All forms of integration are incremental and non-absolute. This means that we can be more or less integrated in particular (perhaps unbalanced) ways, and that integration as an incremental concept does not depend on the possibility of complete integration. Experience suggests that we can become more integrated by overcoming conflicts, but this does not necessarily imply that all conflicts can be overcome (whether this is meant psychologically or at a social or political level).

The psychological basis of belief (thesis)

The psychological basis of the Middle Way (thesis)