Saving the world: the inside take 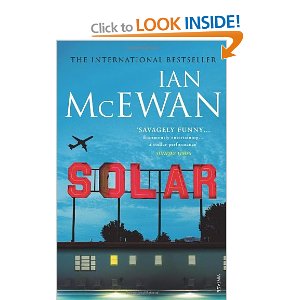 Michael Beard, the Nobel-prize-winning physicist, is both the hero and the villain of this novel. On the one hand he is quite genuinely trying to save the world by providing a radical new solar technology. Nor is he deluded in his attempt (at least in the context of the novel) – he is right, and he can save the world. On the other hand, he gradually loses our sympathy through his progressive slide into narrow self-interested slobbery. He is not afraid to profit from a series of minor acts of deception, each apparently excusable in its context, and to turn the austere reputation of scientific success into profit. At the same time he is turning into an obese heavy drinker as well as a womaniser: a man with no shaping power over his appetites. Like many great writers, Ian McEwan has a talent for drawing us into sympathy with moral failure, and thus understanding it better.

There are lots of interesting moral themes in this novel, that in various ways can be related to the concerns of Middle Way Philosophy. There is a treatment of science and a treatment of hypocrisy that are both interesting. There is also a tragedy of the traditional kind here. Most of all, though, I found myself drawn by McEwan’s exploration of the complex theme of saving the world. Here I must admit to a personal interest, because of my notion that Middle Way Philosophy could potentially save the world. I felt that McEwan’s story particularly had something to say to those of us with such notions.

Scepticism about self-appointed world saviours is cheap. Religious saviours are common enough, and scientific, technological, political or philosophical saviours not far behind them. Michael Beard is a scientific and technological saviour, but once that label is applied it is very easy to raise the moral expectations unrealistically, just as it is with religious or other saviours. All it takes to be a potential world saviour is to have a vision (whether correct or deluded, original or derivative) for how a certain set of ideas if applied could improve the world immensely. The problem lies not in having a vision, but in communicating and enacting it. The problem for Michael Beard is that his personal weaknesses gradually catch up with him so that, on the brink of realising his vision, he is finally unable to do so.

Another way of putting this is that he has ceased to address conditions: by focusing narrowly on a certain type of worldly achievement, he neglects his own spiritual state and lets his unintegrated emotions create physiological, psychological, and social havoc. His is a cautionary tale for any potential world-saviour who lets themselves go too much. But surely, one thinks, it would be worth destroying oneself in that way to save the world? No, because beyond a certain point the asymmetries in our integration cannot be stretched any further. McEwan shows us that one cannot really save the world in this way. Maybe one cannot save the world at all, but merely contribute to doing so in a way that is likely to be more effective if more integrated. One’s personal weaknesses, or even a degree of hypocrisy, are not a problem up to a certain point, but beyond that point they may become quite a major stumbling block. I think of Gordon Brown’s temper and social awkwardness, Mahatma Gandhi’s rigidity and sexual repression, or even Jesus’ exaggerated belief in his own martyred destiny. These figures all achieved much, but they did not save the world. Perhaps their ultimate failure was due to the unacknowledged weaknesses that distorted the insights to be found in their message - or allowed others to do so.

In the case of Michael Beard, his weaknesses catch up with him in a dramatic fashion that one could call tragic. Like many tragic heroes, he is guilty of hubris, and does not take the signs of contrary conditions seriously enough. When skin cancer, plagiarism, and infidelity all catch up with him at the same time, his fall is rather like that of a tragic hero, though he continues to live at the end of the book. As in tragedy, we are moved and we feel that (up to a point) it is unfair: because he really did want to save the world. However, the world is not pre-formatted so as to be so easily saved.

In another way, McEwan also offers a challenge to scientism in this novel. At several points Beard expresses his belief in objective facts-out-there. He gets into a comic debate with a postmodernist which is a great portrayal of the influential idiocies of this kind of dualism: either that facts are absolute or that everyone’s opinion about them is equally justified. Beard also clearly does not understand ethics – but in this he is no worse than the vast majority of people in our society. As I have defined scientism, it is the belief that facts are absolute but values are relative, and Beard illustrates this clearly. He also illustrates the effects of scientistic attitudes. Values in scientism are in practice not completely absent, but are reduced to individual desires (Beard’s slobbish appetites) and conventional acceptance (the approval of the scientific community, the media, and the political establishment, all of which are treated satirically here). If you don’t believe that ethics is any more than that, the implications are clear: you will leave your values unexamined and thus uncontrolled, and fail to address important conditions in your life.

Overall, this is a morally and philosophically complex, but also rich, well-written and highly readable novel. I am not always completely convinced by the coincidences in McEwan’s novels: and here, as in Amsterdam, there were rather too many of these. However, the mature treatment of complex human experience so as to bring out moral themes is just as skilful as it is in Atonement, Enduring Love, and On Chesil Beach. I will continue to be a great McEwan fan.