A Theory of Moral Objectivity 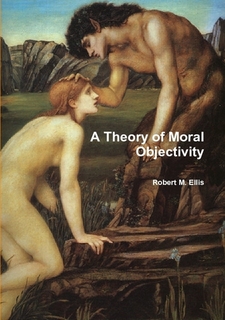 By Robert M. Ellis, originally written as a Ph.D. thesis 'A Buddhist theory of moral objectivity' in 2001. This html version copyright 2008.

A hard-copy paperback book of this thesis is now available from lulu.com and also on Amazon, price UKŻ25 (or equivalent). This relatively high cost is necessary because it is A4 size and has 487 pages (296,000 words). This print version includes an index.

A downloadable pdf version of this thesis is available from the British Library at http://ethos.bl.uk (you will need to search the original title 'A Buddhist theory of moral objectivity', and register with the ethos site, but registration is open and the download pdf is free for researchers). Alternatively you can download a pdf for a small cost from lulu.com.

So now I come to the end of this long and complex argument. To attempt to recapitulate much of its complexity here would add unnecessarily to that length, so in my conclusion I will attempt only two things: a very brief summary of the main points of the book, and a brief discussion of the status of the argument as a whole.

The following ten points are offered not so much as any pretence at an adequate summary of the whole argument I have offered here, but as a portable version, or perhaps as a set of useful slogans. They encapsulate the argument as a set of entirely interdependent points, all of which are rational implications of non-dualism and Sceptical agnosticism through the avoidance of both positive and negative metaphysics. As they are interdependent they could be put in any order, although the summary given here does involve explanatory dependencies of later points on earlier ones.

Non-dualism implies not an abandonment of belief, but a provisional holding of beliefs which can only be described in agnostic terms philosophically, but can be described more positively using a psychological model.

Non-dualism implies a pragmatism of meaning and truth which can be realised by incrementalising metaphysical dualisms. Relativism, which is a negative metaphysical position, is not implied by such pragmatism but precluded from it.

Non-dualism implies that desires are a priori neither ōmineö nor impersonal. ōIö am an ego and a psyche, a cluster of identifications, rather than a metaphysical self. Likewise my experience cannot be limited either to an idealist or a realist perspective, but includes both ōmindö and ōworldö.

Non-dualism implies that desires should be neither dismissed as relative or adopted as absolute, and thus that they should become the provisional basis of a value which increases with the integration of desires.

Integrative psychology provides a theoretical framework in which the psychological implications of non-dualism can be readily understood. Objectivity consists in the incremental extension of the ego to encompass the remainder of the psyche.

Non-dualism implies that moral value consists in the incremental discovery of pragmatic truth through the pursuit of a balanced heuristic, which avoids dogmatic assumptions about moral value and thus promotes its discovery through the integration of desire and belief.

The  as a value is normative, because the application of non-dualism to claims of normativity which are either directly or indirectly rational supports the .

Non-dualism supports a pragmatically effective ethics in which specification of moral norms is created by appeal to the moral authority of dispositional objectivity rather than the false absolutes assumed in deontology or consequentialism.

Throughout this book I have attempted to give specific content to a topic (non-dualism) which is often treated much too abstractly. This did not release me from the necessity of abstract philosophical discussion, but it has allowed the argument to proceed at different levels simultaneously, and may thus allow the assessment of my claims at different levels which are to some extent independent of each other.

The overall, abstract argument at one level is merely a philosophical assessment of the inadequacies of dualism, centering around the limitations of both foundationalism and coherentism as epistemological strategies. If I had confined myself to this Sceptical level of argument, the book would have been much less ambitious but also much less interesting. Still, it may be possible for some to agree with my strictly philosophical criticisms of dualism who do not admit the legitimacy of the remainder of the argument, despite the fact that such assent will have no further implications and its proponents will probably not have escaped dualism in any sense.

Beyond this lies the negative pragmatic argument about the ineffectiveness of dualism, which also depends upon my arguments about the relationship between philosophical views and psychological states. The particular arguments here depend very much on historical interpretation, and it may be possible to disagree with me on some particular points yet accept the general argument which those particular points are selected to illustrate. However, if the general argument is accepted, any criticisms of the particular points about historical figures and movements must fit into the framework provided by the general argument. Most particularly this means that acceptable criticisms from this standpoint must offer an alternative theory about the status of the figure or movement under discussion rather than merely identifying weaknesses in the account from a position of false neutrality. But since this pragmatic critique of dualism attempts to be provisional in the same fashion as all the positive assertions in the book, criticisms which fulfil this criterion will be welcomed as contributing to the process of refining the critique. The critique itself is not one which I see as in any way fixed or limited to what I have written in Part 1, but as part of the process of engagement with dualism as it is found in all areas of  my experience.

Beyond this, again, lies the positive theory of non-dualism that I have put forward. This is yet more provisional than the pragmatic critique of dualism. Taken at one level, it attempts to complete the arguments in Part 1 by showing that a positive account of non-dualism is possible, and the argument may perhaps be accepted at that level even by those who disagree with some of its details. Alternative accounts of non-dualism not only may exist in future, but already do exist in the Buddhist tradition, and my aim has been to provide one for a particular audience rather than undermine the alternatives, provided only that these alternatives are genuinely non-dualist.

It is in the positive account of non-dualism, then, that I consider what I have written as most fully open to correction, and I would like to submit my work, particularly, to the scrutiny of those who have achieved greater integration than I have. Naturally, however, any criticism resulting from such scrutiny will only be useful if it points out better interpretations of non-dualism and thus has an alternative theory to offer within the framework provided by the attempt to overcome dualism.

As for those who agree rather than disagree with all or most of my arguments: I would urge them only to then pursue the practical implications of that agreement as appropriate to whatever circumstances they find themselves in. The world needs the real application of non-dualism, to which the clarification of theories is merely instrumental. In the Western world we have reached a point where non-dualism is available to us, as a result of the conditions of our own history as well as contact with Buddhism. We are fortunate, and yet surrounded by problems: and these problems nearly always originate with dualism. We live in a world which is neither wholly saved not wholly lost, and thus at a point where each change in disposition can make a difference. In such a situation, ethics needs to be reclaimed in a practical as well as a theoretical sense.